The Guide tab/subpanel is a special purpose tool dealing with guidelines in Glyph Window (GW). Its actions are governed by the TypeRig panel masthead (MH). 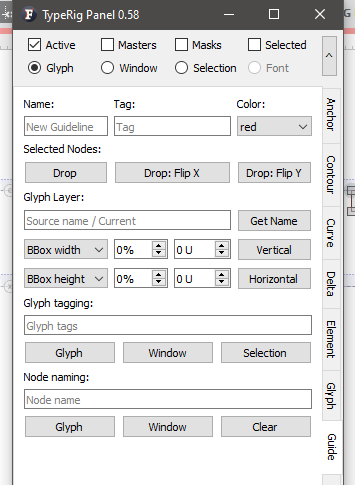 An overview of Guide panel

The panel is split into multiple sections each with its own special functionality.

The very first section contains some basic fields for choosing guideline name, tag and color. These work together with Selected nodes section that offers the following functionality:

This section deals with guideline creation based on some glyph/layer/font parameters - bounding box (BBox) width and height as well as glyph advance and font wide parameters such as caps-height, x-height and etc. All operations affect only the currently active glyph in GW/FW.

Please not that all newly created guidelines are named according to the source chosen and measurement + adjustment used. All measurements are done per layer (controlled by MH).

Will create/add new glyph tag to:

Node naming Will tag/name all nodes selected in: